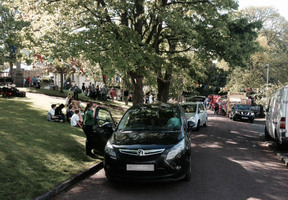 A sunny afternoon this year and a good turn out for the Hirings on Ryton Village Green organised by mid Tyne Lions on 23 May.

The Friends lent a hand in the opening of Holy Cross church to visitors.

The Friends lend a hand in the opening of the church to visitors. Richard Taylor membership secretary tries to enrol Councillor Geddes Gateshead's Mayor and the Lady Mayoress as Friends. photos by Alison Stancliffe

It was a wonderful inspiration of Pat Hobson’s to approach Gateshead College to offer a showcase opportunity for promising students at the Spring Concert .

“Watercolour” proved a lovely bunch – three of the band being siblings .

A fourth sparky younger sister Mary sat with her mum behind me happily dealing the dirt on band politics!

So remember you read it here first not in NME….

Mary’s  brothers are twins – James (the lead guitarist) is just half an hour older than Bassist Andrew!.

Elder sister Rebecca has only just joined, replacing the original female singer, but Rebecca is presently on the short list for a London teaching job..

I shall borrow Rector Tom Jamieson’s closing concert critique in praising the close and most unusual harmonies  Watercolour created between voices and guitars.

Let us all enjoy following their future careers. Best Wishes and Thank You.

The Caedmon Choir, based at Sage Gateshead, entertained us for the second half.

Sitting quite close to the performers it was striking how visual is the choir's delivery, not just in the singers' expressions, but in the physical movement of the choir, the almost Mexican-Wave like choreographed swaying and hand movements.

Much must be inspired by the Music Director Eleanor Mooney who seems to draw forth the choir's responses magnetically using her mesmerising arm and hand gestures.

There were some lovely choices in the programme: the opening "Hey Ho To the Greenwood" as the Spring evening light faded outside; the poignent

story of Grimsby decline in "North Wall" and - for me - the brave first performance in public of  'Padam Padam' derived from the great Edith Piaf's classic.

Just want to be reminded who Caedmon was again? Answer here

We have to thank Ryton and District Camera club for covering the event. The above images are a selection from their evening's work.

The event was held in the Masonic hall where everyone had a wonderful time and the music, provided by The Flying Toad Ceilidh Band, and the calling by Ednie Wilson were excellent.

We had a great night trying the techniques of the dances, which weren't always mastered, to much hilarity. The number attending, around 60, was just about right given the need to still have space to dance!

All agreed the event had been a resounding success….

We'd all hoped for a fine day but it wasn't to be, steady rain set in from early afternoon onwards.

A bonus was that most folk clustered into Holy Cross church seeking shelter from the elements.

The April 2014 Spring Concert really was a Treat 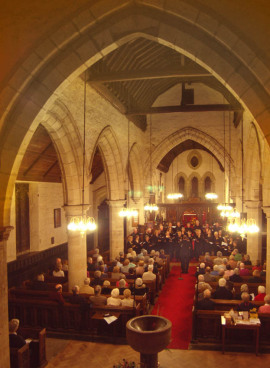 Thanks to her intimate knowledge of choirs in the Tyne and Wear area, Pat Hobson was able to lure two contrasting choirs to perform in Holy Cross, Ryton. Though both choirs were unaccompanied, we heard very different styles of singing before and after the interval.

The Sacred Harp singers introduced the majority of us to “Shape Note Singing” - invented by a Baptist Minister in the early days of the United States at the time of Thomas Jefferson. It is still a very popular a cappella genre, having spawned rival modern song books. The singers were casually dressed, the women on one side in a variety of colourful country style skirts, jeans and tops while some men even risked striped “Limey” rugby football shirts !

Helen Barber, the charismatic American leader, explained how ‘The Shape Notes’: squares, triangles and circles denote “differences of absolute pitch”. So the singers can relate to one another simply by one leading off and the others pitching in around.

Their set ended with us all whipped in to sing along to Amazing Grace.

After we’d all enjoyed the new social facilities in the opened up area below the oak spiral stair at the west end of the church, The Durham Singers dressed in unrelieved black, assembled formally to prepare us for their major piece: a five part Mass by William Byrd.

Although at first sight a far larger choir, if one attempted to work out how many voices might be assigned to each of the five polyphonic parts, they seemed somehow fewer in number. 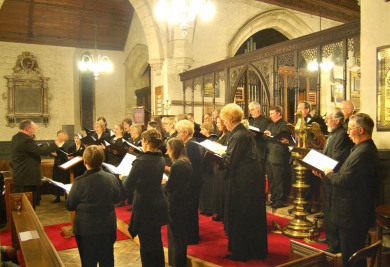 The Durham Singers Music Director Julian Wright  gave us a fascinating introduction: After the decades of beheadings and burnings at the stake through the brutal seesaw of the Tudor Reformation, here was a complex Roman Catholic Latin Mass composed and  performed at the time of Shakespeare in a small Essex chapel less than 30 miles from the great Protestant Queen Elizabeth’s Chapel Royal at Westminster!

Echoing off the nave arches of Holy Cross, which have stood through 700 turbulent years, the singing was sublime and the setting perfect. The interweaving voices transported us back to a time when this music could mean the difference between life or death, or at least between work and banishment.

We went home much the richer for the experience; the evening being, as the football pundits say “a game of two halves”.

Our deep thanks to both choirs for freely giving of their time and effort.

For a great “We who are left: music after conflict” concert to be given in Ushaw Hall’s great chapel (by AWN Pugin, architect of the Houses of Parliament) check here:
http://www.durham-singers.org/summer-concert-2014.html

Members of Gateshead's Caedmon Choir in concert at Holy Cross 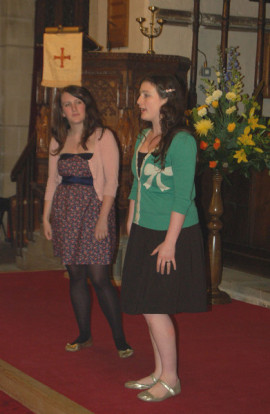 The Unthanks grew up in Ryton and attended what is now Charles Thorp School.

They appeared in a programme with their father George Unthank, still a resident of Ryton Village.

George has brought his sword dancing group The Addison Rappers to demonstrate their skills at all the Friends' autumn céilidhs. 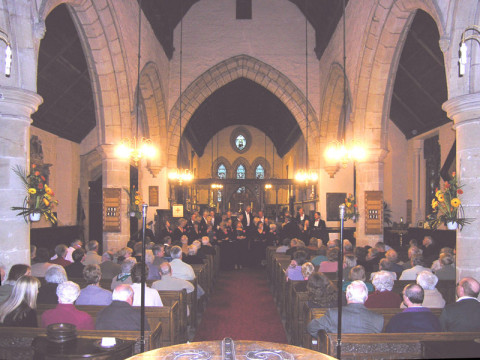 The Newcastle Choral Society gave a magnificent concert in April 2006. Pat Hobson the Chair of the Friends of Holy Cross put an enormous amount of work into making the Friend's Spring Concert a success. 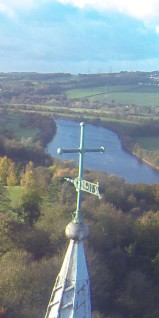